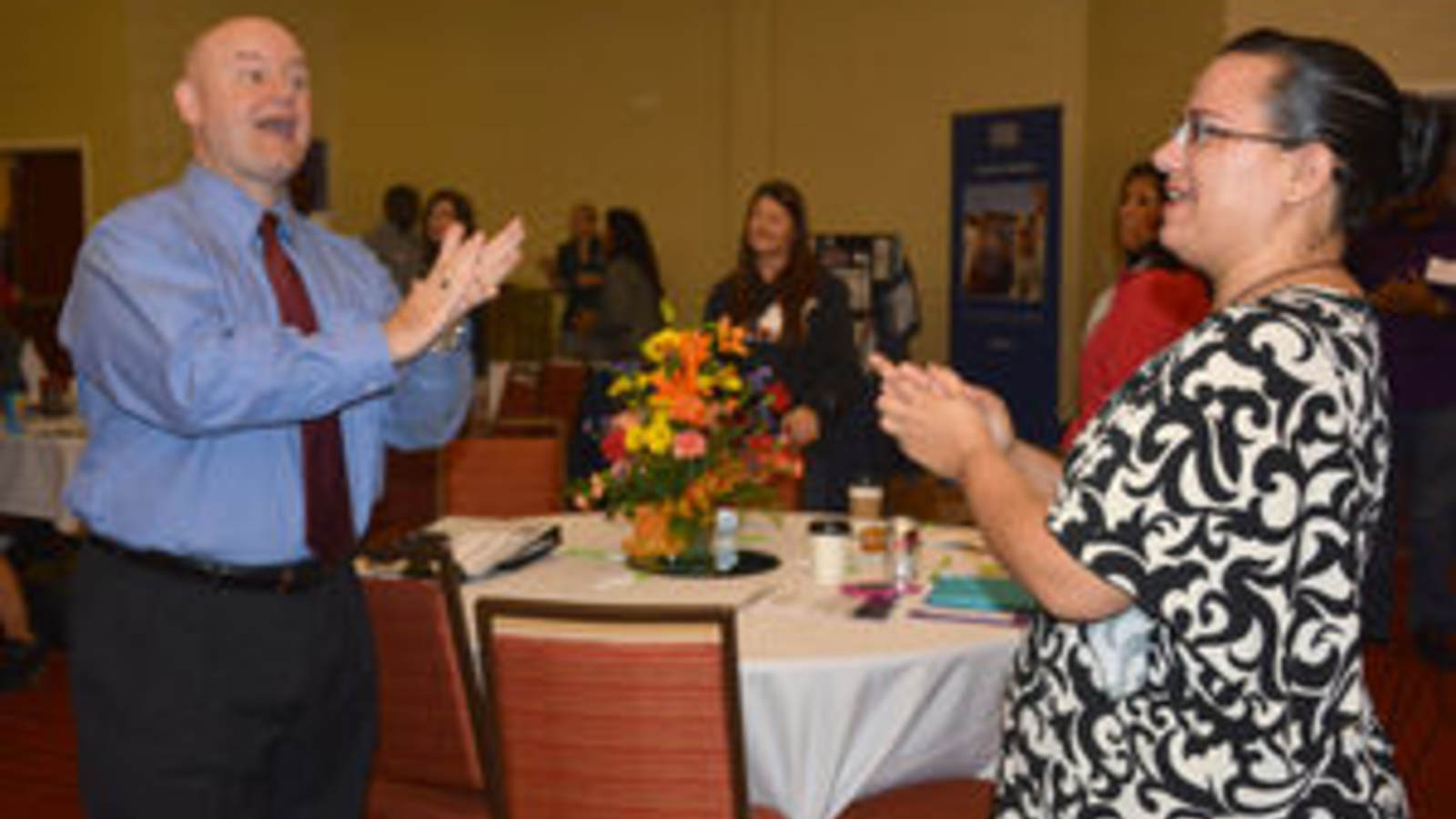 Army spouse Gisele became so overwhelmed with the caregiving demands to her combat-wounded husband that she cocooned herself in the world inside her home. Her daily stresses, combined with her husband’s inability to cope with his invisible wounds elevated marital tensions and soon, the two quit talking. Eventually, her husband sought treatment, but there was still a major hurdle: Gisele had forgotten how to live. Thanks to the recent USO Caregivers Seminar, Gisele laughed and smiled. It was good, she said, to reconnect with the real world and meet other caregivers during the all-day conference, held Nov. 18 at Killeen’s Courtyard Marriott. The event was part of WTB’s Warrior Care Month. “When you’re inside of this,” she said, “you think you’re alone and forget what life is like on the outside,” adding that one of the most valuable insights she gained from conference was the importance of taking care of oneself. “If you don’t take of yourself, how can you take care of your soldier?” More than 60 attended the seminar that included topics unique to the military such as how marriage dynamics change when a spouse is wounded or injured, the importance of caring for the caregiver and the role of caregivers in helping service members cope with service-related moral injures. According to USO Fort Hood Director Isabel Hubbard, the purpose of the seminar was to recognize the stresses of being a caregiver, caretaker or medical provider to a wounded, ill or injured service member. “We know there’s a need for them to learn how to deal with stress and to communicate effectively,” she said. “It’s OK to not to be a Superman or a Superwoman and to stop and take a breath sometime. Our goal here today is to show you the right things to do and new techniques and methods that can make the day a little better.” Stephanie Booth, spouse and caregiver to a former Warrior Transition Brigade soldier, said she was grateful to the USO for hosting the seminar to learn new tools to “take care of me.” “It’s so easy to lose yourself because as caregivers, we tend to feel secure when we are in control,” she said. “But it’s really just an illusion. We really are just hurting ourselves by feeling that we have to be on top of everything,” adding how important rest, nutrition and asking for help is for caregivers. “Even if I were there all the time, I can’t make things run perfectly.” Guest speaker for the first-ever event was Col. Douglas Woodall, commander of the Warrior Transition Brigade, who said the purpose of the seminar was to help caregivers connect to not only programs and resources, but also to each other. “One of the most important things we can do is take care of our caregivers,” he said, issuing a challenge to the group to put on their “empathy hat” and step outside of their comfort zone. “When our families understand that the life they planned is not going to go the way they thought it was going to go, it doesn’t mean life isn’t worth living or that life isn’t going to be a as fulfilling or rewarding as it could be,” he said. “That’s why it’s important that the caregivers become resilient so they can help our service members get through those hard times.” Davila, caregiver and spouse to a WTB soldier, said she constantly beats herself up worrying that she is not doing enough to help her combat-wounded husband. “My biggest fear as a caregiver is nothing I do will ever be good enough,” she said, admitting that her “perfectionist” personality is in competition with reality. “I would rather take on the stress and burden because I am so desperate to help him. Even though I’m overly stressed, at this moment, I feel like I’m the stronger one.” Davila said she left the seminar feeling better because her feelings were validated by hearing stories similar to hers. “It really does help a lot,” she said, “when you actually are with people and hear their stories in real time.” She also said she knows things will never be like they were before her husband was wounded, and has accepted that she has to “learn how to walk on eggshells without cracking them.” “That’s very hard to do when you are so engrossed with taking care of someone you love and would do anything for because when they hurt, you hurt,” she said. “My goal is to keep my family in tack, something that’s very hard to do when one of the pieces is broken.” Davila, who also works full time, said the first thing she planned on doing after the workshop was going home and telling her husband she loved him. “I am going to tell my husband when I get home that I’m not perfect. I’m learning with him just as much as he is learning with me,” she said. The seminar was just one of several WTB events held during November’s Warrior Care Month to increase awareness of the significant achievements and contributions of wounded, ill and injured service members and their families. Other activities included educational and employment seminars, spiritual fitness activities and adaptive wheelchair soccer and sitting volleyball demonstration. This year’s theme for the DoD month-long commemoration was a “Show of Strength” to demonstrate the mental and physical resilience of the nation’s wounded, ill and injured service members, as well as to recognize the critical support provided by Families and caregivers in their healing and transitioning.